"More Teenage Triangle"(Colpix 468)-LP. This vintage Teen Lp was released in 1964 and features Paul Petersen,James Darren and Shelley Fabares. Their photos are featured on the front and back covers of the LP. Tracks include-Put On A Happy Face,Gegetta,Billy Boy,She Rides With Me,A Lot Of Livin To Do,How Lovely To Be A Woman,Kids,Baby Talk To Me,One Girl,He Don't Love Me,Mama Your Little Boy Fell,Grande Luna Italiana.Paul Petersen (born William Paul Petersen on September 23, 1945, in Glendale, California) is an American movie actor, singer, novelist, and activist for child stars, who's primarily known for his character-type roles in the 1960s and 1970s. The naturally black-headed Petersen achieved greater fame in the 1960s, at an early age, by playing Donna Reed's son, Jeff Stone, on The Donna Reed Show. In the early 1980s, he also had a recurring role as a police officer on Matt Houston, and in the late 1990s, he played author, Paul Conway, in the film Mother's Day.Petersen's fame brought recording offers and although his singing voice was limited, he had hit record singles with songs such as "My Dad", "She Can't Find Her Keys", "Amy", and "Lollipops and Roses" that made it into the Billboard Hot 100. The LP has been autographed on the front cover by Paul Petersen in black,James Darren in blue and Shelley Fabares in purple...................CONDITION OF VINYL,COVER AND AUTOGRAPHS IS VG................. 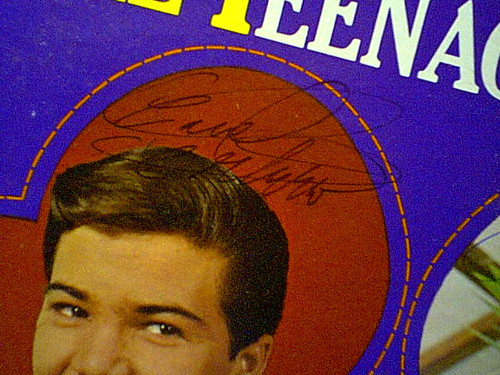