Dave Pell(Atlantic 1249)-"Love Story"-LP. Some tracks include-Can't We Be Friends,I've Got A Crush On You,Let's Do It plus more!Dave Pell (born February 26, 1925) is an American jazz saxophonist and bandleader born in New York City.Pell first played in his teens with the big bands of Tony Pastor, Bob Astor, and Bobby Sherwood, and then moved to California in the middle of the 1940s. There he played on Bob Crosby's radio show in 1946, and was a member of Les Brown's band from 1947 to 1955. In 1953 he began working with his own ensembles, mostly as an octet; among the players were Pepper Adams, Benny Carter, Mel Lewis, Red Mitchell, Marty Paich, and Art Pepper. These ensembles recorded in the 1950s for Atlantic, Kapp, Coral, Capitol, and RCA Victor; alongside this, he played as a sideman for Shorty Rogers, Pete Rugolo, Benny Goodman, and Gene Krupa. He also produced in the 1950s and 1960s for Tops, Uni and Liberty; among his credits in production were some singles by Gary Lewis & the Playboys. In the 1970s he assembled the group Prez Conference, a Lester Young tribute ensemble. In the 1980s he returned to the octet format, and played on and off into the 1990s.The LP has been autographed on the front cover by Dave Pell with a fountain pen in blue......CONDITION OF VINYL,COVER AND AUTOGRAPH IS VG. 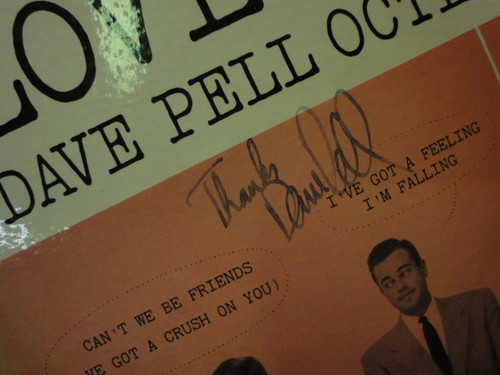