Playbill for the Longacre Theatre-"Tea And Sympathy"-1955-6 1/2" X 9"-20 pages-theatre program. This vintage Playbill features the 1955 Broadway play-"Tea And Sympathy" starring Tony Perkins. The Playbill also features an original ticket stub with price of seats at $2.00! Tea and Sympathy is a 1953 stage play in three acts by Robert Anderson.It received its premiere on Broadway at the Ethel Barrymore Theatre on September 30, 1953 in a production by The Playwrights' Company, directed by Elia Kazan and designed by Jo Mielziner. The play starred Deborah Kerr, Leif Erickson and John Kerr. It transferred to the Longacre Theatre, and later the 48th Street Theatre. It had a total run of 712 performances. During the run, Joan Fontaine and Anthony Perkins took over the roles played by Deborah Kerr and John Kerr.The Playbill has been autographed on the front by Tony Perkins with a fountain pen in black......BOTH PLAYBILL AND AUTOGRAPH ARE IN VERY GOOD CONDITION............ 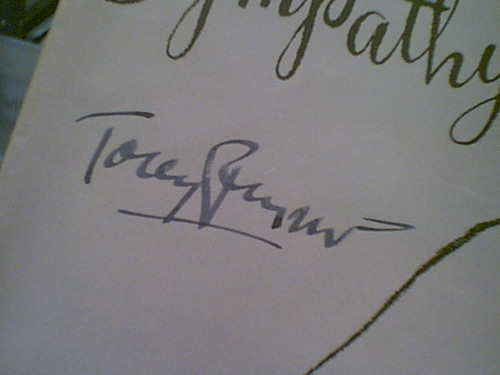