Playbill for The Cort Theatre-1962-"Harold"-starring Anthony Perkins-6" X 9"-32 pages-theatre program.After working as a juvenile lead actor early in the 1950s, especially winning praise for his Broadway role in Tea and Sympathy (1954), Perkins put in strong performances in the films Tin Star (1957 and Fear Strikes Out (1956). In 1960 he landed his most famous role as Norman Bates in Hitchcock's Psycho, one of the classic screen performances. He later played in the film's sequels and prequel and numerous other films in the 1970s and 1980s. Perkins's father, Osgood Perkins, was also an actor.The Playbill has been autographed on the front cover by Tony Perkins with a fountain pen in blue...............BOTH PLAYBILL AND AUTOGRAPH ARE IN VERY GOOD CONDITION............. 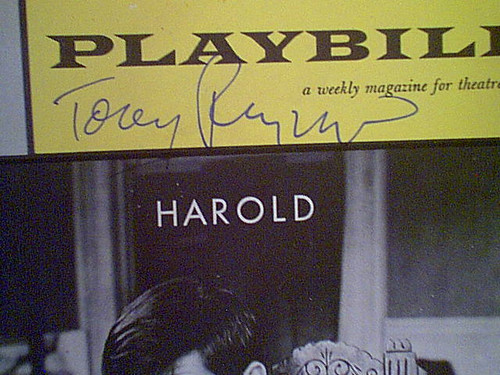