Music From The Original Motion Picture Soundtrack-"Psycho II"(MCA 6119)-LP.Psycho II is a 1983 American slasher film directed by Richard Franklin and written by Tom Holland. It is the first sequel to Alfred Hitchcock's Psycho and the second film in the Psycho series. It stars Anthony Perkins, Vera Miles, Robert Loggia, and Meg Tilly. The original music score was composed by Jerry Goldsmith. Set 22 years after the first film, Norman Bates is released from the mental institution and returns to the house and Bates Motel to continue a normal life. However, it soon becomes apparent that his troubled past is going to continue to haunt him. It is unrelated to the 1982 novel Psycho II by Robert Bloch, which he wrote as a sequel to his original novel Psycho. Psycho II grossed over $34 million at the box office. The film was followed by Psycho III (1986) and Psycho IV: The Beginning (1990).The LP has been autographed on the front cover by Tony Perkins and Robert Loggia....CONDITION OF VINYL,COVER AND AUTOGRAPHS IS VG PLUS. 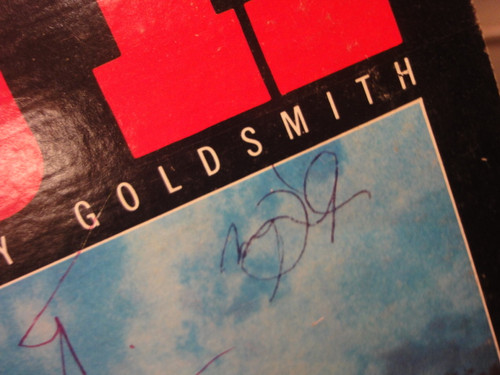