This item is an 8" X 10",black and white photo of Tony Perkins in a scene from the 1964 Movie-"A Ravishing Idiot".French sex symbol Brigitte Bardot stars as Penny, a scatterbrained young lady who is a beautician to the wife (Denise Provence) of British security chief Dumfrey (Andre Luguet). Harry (Anthony Perkins) is a young man of Russian origin enamoured by Pennywho is more than what she seems. Harry has just lost his job at the bank and begins dealing with his father's old crony; a Soviet agent (Gregoire Aslan) attempting to get ahold of certain British documents containing NATO secrets. Dumfrey uses Penny and his wife in an attempt to uncover the Russian espionage operation.The photo has been autographed on the front by Tony Perkins..............BOTH PHOTO AND AUTOGRAPH ARE IN VERY GOOD CONDITION......... 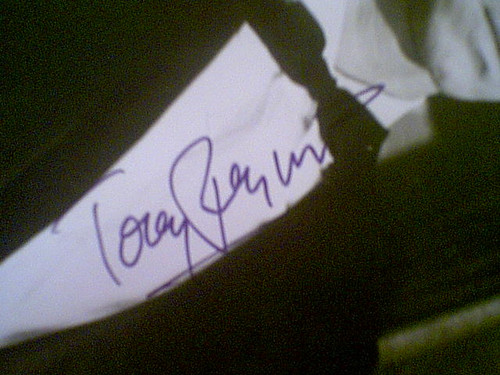