Paul Winchell And Jerry Mahoney(Aamco 66)-"Chips Of Wisdom"-LP. This vintage LP was released in the late 50's or early 60's on the blue Aamco label. The LP features a great color cover photo of Paul Winchell and Jerry Mahoney.As a young man, Mr. Winchell was shy and stuttered, and he used ventriloquism as a form of therapy. Emulating his routine on the smart-alecky radio banter between Edgar Bergen and his dummy Charlie McCarthy, the teenage Mr. Winchell soon found a welcoming Depression-era audience. He rose from the vaudeville circuit to radio and television, becoming a fixture of children's television. Most famously, he and his sassy dummy, Jerry Mahoney, had "The Paul Winchell-Jerry Mahoney Show" on NBC from 1950 to 1954. The program was ambitious, featuring comedy, music, quizzes and dramatic segments to showcase Mr. Winchell's range. It also was one of Carol Burnett's early credits; she played Mahoney's girlfriend.Mr. Winchell, whose other dummy was dimwitted sidekick Knucklehead Smiff, appeared on other variety and quiz programs and was part of the weekend morning shows for children. As animated fare became more popular, he adapted and worked for Hanna-Barbera, Disney and other major producers of cartoons.He shared a Grammy Award for Best Recording for Children for "Winnie the Pooh and Tigger Too!" (1974). At the suggestion of his third wife, who is British, he said he improvised Tigger's catchphrase "Ta-ta for now," or "TTFN."The LP has been autographed on the front cover by Paul Winchell with a fountain pen in black.............CONDITION OF VINYL,COVER AND AUTOGRAPH IS VG............... 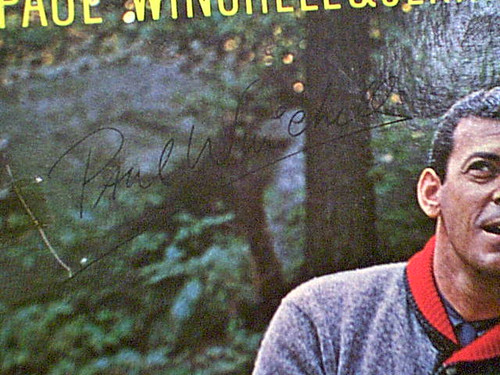