Jack Paar-"Three On A Toothbrush"-1965-Doubleday-276 pages-5 1/2" X 9-hardcover book-with jacket-with photos-Book Club Edition-Signed By Author.Jack Paar is best known for hosting the Tonight Show from 1957 to 1962. He gained a reputation as a thinking man's talk show host, and also for a certain emotional sensitivity: in one famous 1960 incident he stormed off the set during a broadcast after a network censor had edited one of his jokes. A few weeks later he returned to the show with the quip, "As I was saying before I was interrupted..." Paar stepped down for good in 1962 and was replaced by Johnny Carson.The book has been autographed on the title page by Jack Paar....BOTH BOOK AND AUTOGRAPH ARE IN VERY GOOD CONDITION.JACKET HAS SOME WEAR............... 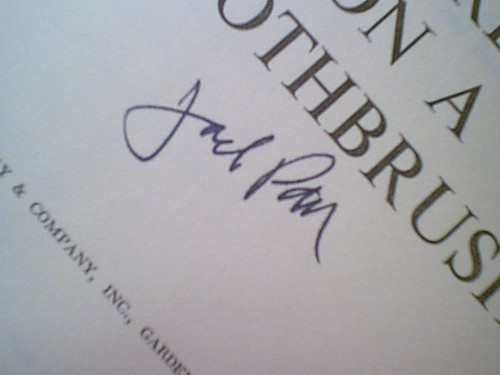