Sarah Palin-"Going Rogue An American Life"-2009-Harper-6" X 9"-413 pages-Hardcover Book-With Jacket-With Photos-First Edition-Signed By Author.Sarah Palin, the first female governor of Alaska, was John McCain's running mate in the U.S. presidental elections of 2008. Palin was born in Idaho but moved to Alaska with her family when she was three months old. Two accomplishments from her youth have become especially well known: she played point guard for Wasilla High School's 1982 championship team, and she placed second in the Miss Alaska contest of 1984. After attending four different colleges, she earned a journalism degree from the University of Idaho in 1987, then returned to Alaska and married Todd Palin, her high school boyfriend, in 1988. After a few stints as a TV sportscaster in Anchorage, Palin joined the Wasilla city council in 1992, then served as the city's mayor from 1996-2002. She became Alaska's first woman governor on 4 December 2006, after running a campaign based on ethics and clean government. Two years later, in a surprise selection, Arizona senator McCain made her the Republican Party's first female candidate for vice president. She and McCain were defeated by the Democratic ticket of Barack Obama and Joe Biden, but that didn't slow Palin's apparent ambition for the spotlight. She kept in the public eye throughout the beginning of 2009, making high-profile trips out of Alaska. In a surprise move, she resigned in 2009, in the middle of her first term as governor, and became a highly-paid public speaker and Obama critic. She has since published a memoir, Going Rogue (2009), become a FoxNews commentator and starred in her own reality show, Sarah Palin's Alaska (2010).The book has been autographed on the title page by Sarah Palin......BOTH BOOK AND AUTOGRAPH ARE IN VERY GOOD CONDITION. 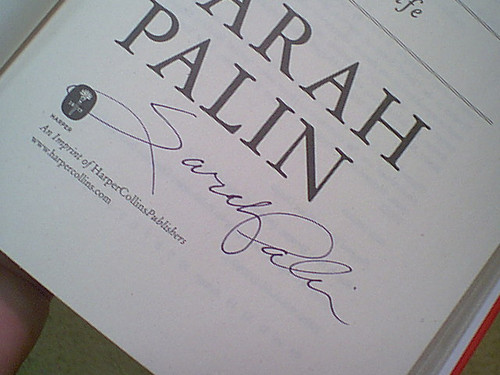