TV Guide-Nov. 16,1957. This vintage TV Guide-which originally sold for fifteen cents-features a color cover photo of singer Patti Page.Clara Ann Fowler (born November 8, 1927), known by her professional name Patti Page, is an American singer, one of the best-known female artists in traditional pop music. She was the best-selling female artist of the 1950s,and has sold over 100 million records.Page signed with Mercury Records in 1947, and became their first successful female artist, starting with 1948's "Confess." In 1950, she had her first million-selling single with "With My Eyes Wide Open, I'm Dreaming," and would eventually have 14 additional million-selling singles between 1950 and 1965.Page's signature song, "Tennessee Waltz," recorded in 1950, was one of the biggest-selling singles of the twentieth century, and is also one of the two official state songs of Tennessee. "Tennessee Waltz" spent 13 weeks atop the Billboard magazine's Best-Sellers List in 1950. Page had three additional #1 hit singles between 1950 and 1953, with "All My Love (Bolero)", "I Went to Your Wedding," and "(How Much Is That) Doggie in the Window."Unlike most pop music singers, Page blended the styles of country music into many of her most popular songs. By doing this, many of Page's singles also made the Billboard Country Chart. Towards the 1970s, Page shifted her career towards country music, and she began charting on the country charts, up until 1982. Page is one of the few vocalists who have made the country charts in five separate decades.When rock & roll music became popular during the second half of the 1950s, traditional pop music was becoming less popular. Page was one of the few traditional pop music singers who was able to sustain her success, continuing to have major hits into the mid-1960s with "Old Cape Cod," "Allegheny Moon," "A Poor Man's Roses (Or a Rich Man's Gold)," and "Hush, Hush, Sweet Charlotte." The TV Guide has been autographed on the front cover by Patti Page with a fountain pen in blue.................BOTH TV GUIDE AND AUTOGRAPH ARE IN VERY GOOD CONDITION......... 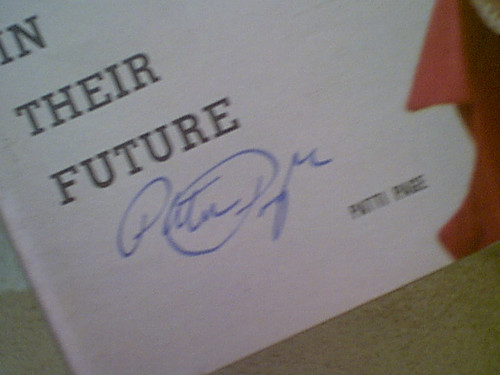