THIS IS AN AUTHENTICALLY AUTOGRAPHED PHOTO BY PAT PAULSEN... THIS IS AN 8 INCH BY 10 INCH BLACK AND WHITE PHOTO SIGNED BY PAT PAULSEN. 'PAT PAULSEN FOR PRESIDENT'. CONDITION OF THE PHOTO AND AUTOGRAPH IS VERY GOOD. Patrick Layton Paulsen (July 6, 1927  April 24, 1997) was an American comedian and satirist notable for his roles on several of the Smothers Brothers TV shows, and for his campaigns for President of the United States in 1968, 1972, 1980, 1988, 1992, and 1996, which had primarily comedic rather than political objectives, although his campaigns generated some protest votes for him. 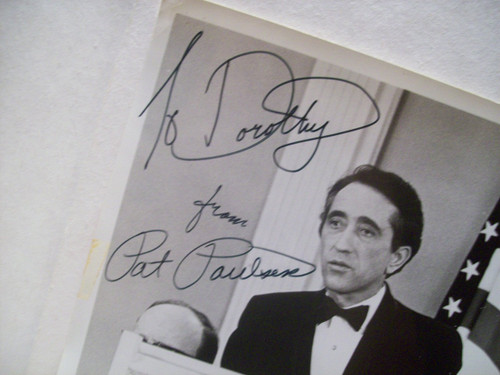