This item is an 8" X 10",black and white photo of Paul Newman and Michael Sarrazin in a scene from the movie-"Never Give An Inch".Also known as Never Give an Inch, this film was based on a novel by Ken Kesey. Paul Newman (who also directed) stars as Hank Stamper, the oldest son of an Oregon logging family headed by Henry (Henry Fonda). Hank's half-brother, Leeland (Michael Sarrazin), embittered over Henry's treatment of his late mother, returns after a ten-year absence to work in the family business. Leeland's presence causes friction with Henry, who resents his prodigal son's hippie mindset, and Hank, who perceives Leeland as a threat to his own position in the family structure. Hank has good reason to feel resentful: before long, his wife, Viv (Lee Remick), has entered into an affair with Leeland. Meanwhile, Henry wages an ongoing battle with the unionized loggers in the region, who threaten reprisals should Henry attempt to continue his business without union help. The photo has been autographed on the front cover by Paul Newman and Michael Sarrazin................BOTH PHOTO AND AUTOGRAPHS ARE IN VERY GOOD CONDITION.................... 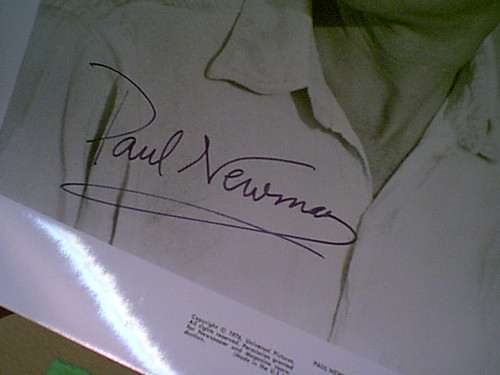