This item is an 8 1/2" X 12",black and white lithograph photo of actor Paul Muni in a scene from on of his famous movies.The lithograph photo has been mounted on an 8 1/2" X 12" piece of construction paper. Minus the character makeup which distinguished most of his earlier stage appearances, Muni scored a hit as a gangster in the Broadway production Four Walls. He was signed by Fox Studios in 1929, but he was so displeased by his first two films (The Valiant and Seven Faces) that he hurried back to Broadway. In 1931, Muni starred in the original stage production of Counsellor at Law, and also resumed his film career, playing a sister-obsessed Al Capone-type in Scarface. With his still-powerful portrayal of a hunted (and haunted) convict in I Am a Fugitive From a Chain Gang (1932), Muni launched his long association with Warner Bros. Insisting upon being permitted the broadest range of characterizations possible, Muni alternated between "entertainments" like Dr. Socrates and prestige pictures which allowed him to don makeup and experiment with accents. He is most fondly remembered for his trio of biographies: 1936's The Story of Louis Pasteur (which won Muni his Oscar), 1937's The Life of Emile Zola, and 1939's Juarez. On the set, Muni was almost completely reliant upon the advice and counsel of his wife; if she didn't like a "take," the scene would have to be reshot. Like many highly individual talents, Muni gained a reputation as an eccentric, his character quirks ranging from relaxing between takes by playing his violin to (reportedly) going into a panic whenever he saw someone wearing the color red. Extremely self-involved, Muni often came to the set with his performance totally developed in advance, and did not alter his interpretation no matter what nuances or surprises his fellow actors might throw at him. After a long period of professional disappointments, Muni made a triumphant comeback in the role of the Clarence Darrow-like Henry Drummond in the 1955 Broadway production Inherit the Wind, for which he won the Tony award. After his final film, The Last Angry Man, Paul Muni was forced to curtail his appearances due to encroaching physical infirmities; one of his last performances was in the TV play The Last Clear Chance, wherein Muni was seen sporting a hearing aid through which he was "fed" his dialogue. In addition to his Best Actor win for Pasteur and his four Best Actor nominations for The Valiant, Chain Gang, Zola and The Last Angry Man, Muni received an "unofficial" Best Supporting Actor nomination, as a write-in candidate, for Casablanca helmer Michael Curtiz's 1935 Black Fury; he came in second.The lithograph photo has been autographed on the front by Pual Muni with a fountain pen in black........BOTH LITHOGRAPH PHOTO AND AUTOGRAPH ARE IN EXCELLENT CONDITION................... 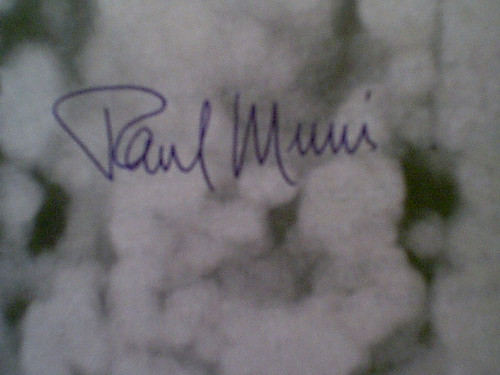