Joe Pantoliano-"Who's Sorry Now"-"The True Story Of A Stand-Up Guy"-2002-Dutton-5 1/2" X 9"-296 pages-hardcover book-with jacket-with photos-Signed By Author.Joseph Peter "Joe" Pantoliano (born September 12, 1951) is an Emmy Award-winning American film and television actor.He appeared as Cypher in The Matrix, the character of Ralph Cifaretto in the HBO show The Sopranos for which he won an Emmy, and Guido the Killer Pimp in Risky Business, for which he first grew to fame. Pantoliano is also known for his role as Eddie Moscone, the bail bondsman, in the Robert De Niro comedy Midnight Run, as double-crossed mafioso Caesar in Bound and as police officer John Edward "Teddy" Gammel in Memento. He also played Deputy Marshal Cosmo Renfro in The Fugitive along with Tommy Lee Jones and reprised the role in the sequel U.S. Marshals. In 1985, he appeared as the villainous Francis Fratelli in The Goonies.In 2003, Pantoliano replaced Stanley Tucci in the Broadway play Frankie and Johnny in the Clair de Lune. That same year he won the Emmy Award for Outstanding Supporting Actor in a Drama Series for The Sopranos. He is often referred to as Joey Pants, due to the difficulty some have pronouncing his Italian surname. Pantoliano has endorsed 2008 Democratic presidential candidate Barack Obama.The book has been autographed on the title page by Joe Pantoliano.......................BOTH BOOK AND AUTOGRAPH ARE IN EXCELLENT CONDITION.............. 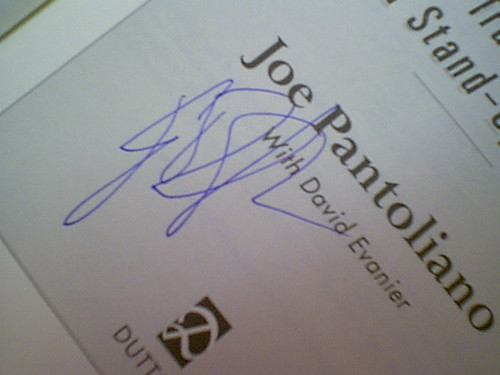