Original Television Soundtrack-"Alice Through The Looking Glass"(RCA LOC 1130)-LP. This soundtrack LP features the 1966 television special-"Alice Through The Looking Glass"-starring Jack Palance,Agnes Moorehead and Jimmy Durante. They are featured on the back cover in original scenes.No TV or movie producer has yet to resist the temptation of turning Lewis Carroll's Alice in Wonderland and Through the Looking Glass into an all-star musical. Certainly the folks at ABC were unable to resist turning out the 1966 taped TV special Alice Through the Looking Glass, but the end result was so pleasing that we can forgive the network for succumbing to temptation. Newcomer Judy Rolin plays Alice, who passes through the mirror, undergoes numerous fantastic adventures with a variety of eccentric characters, and is finally crowned Queen of Wonderland. The stellar guest cast includes Ricardo Montalban, Nanette Fabray, Robert Coote and Agnes Moorehead. Best bits: Jimmy Durante as Humpty Dumpty, Tom and Dick Smothers as Tweedledum and Tweedledee, and Jack Palance as the Jabberwocky! The LP has been autographed on the back cover by Jack Palance with a fountain pen in brown,Agnes Moorehead with a fountain pen in red and Jimmy Durante with a fountain pen in black.................CONDITION OF VINYL,COVER AND AUTOGRAPHS IS VG PLUS.RECORD IS IN ORIGINAL RCA INNER SLEEVE................. 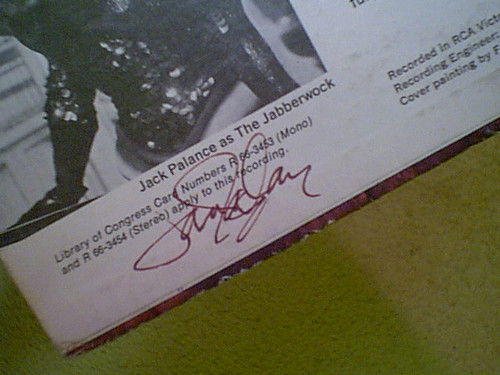