Playbill For The Cort Theatre-"The Rainmaker"-1955-6 1/2" X 9"-21 pages-theatre program. This vintage Playbill features the 1955 production of "The Rainmaker" starring Geraldine Page.Geraldine Sue Page (November 22, 1924  June 13, 1987) was an American actress. Although starring in at least two dozen feature films, she is primarily known for her celebrated work in the American theater.Her appearance as Alma in the Off-Broadway revival of Tennessee Williams' Summer and Smoke in 1952 was as earth-shattering and legendary as anything that had ever happened in the American theatre. Summer and Smoke had not been particularly well received in its Broadway incarnation. Page's performance (as the minister's daughter consumed with infinite longing) and that 1952 production, directed by Jose Quintero, gave the play a new birth, and, according to common wisdom, it was that production (for its daring, for its fervor, for its being "downtown" rather than in the artistically "safe" realm of Broadway) which gave birth to the Off-Broadway movement in New York theatre. From then on, Page's name was synonymous with a kind of heart-stopping, naturalistic magic in the theatre, continuing with her work, on Broadway, as the spinster in "The Rainmaker" and as the frustrated wife whose husband becomes romantically obsessed with a young Arab, played by James Dean, in "The Immoralist." The Playbill has been autographed on the front cover by Geraldine Page with a fountain pen in blue...............BOTH PLAYBILL AND AUTOGRAPH ARE IN VERY GOOD CONDITION........ 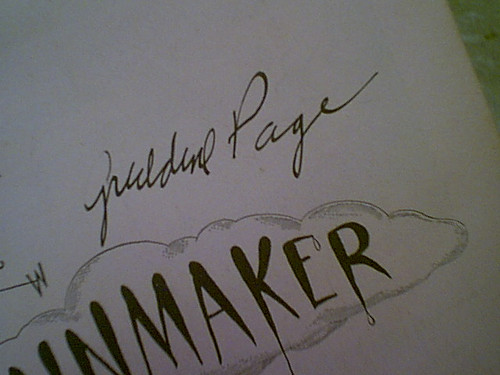