Boxing And Wrestling Magazine-March 1963-82 pages. This vintage magazine-which originally sold for fifty cents-features a color cover photo of Floyd Patterson plus an article with photos.Floyd Patterson (January 4, 1935  May 11, 2006) was an American 2-time world heavyweight boxing champion. At 21, Patterson was then the youngest man to win the world heavyweight championship and, later, the first to regain it. He had a record of 55 wins 8 losses and 1 draw, with 40 wins by knockout. He won the gold medal at the 1952 Olympic Games as an amateur middleweight.The magazine has been autographed on the front cover by Floyd Patterson with a fountain pen in brown............BOTH MAGAZINE AND AUTOGRAPH ARE IN AVERAGE CONDITION. 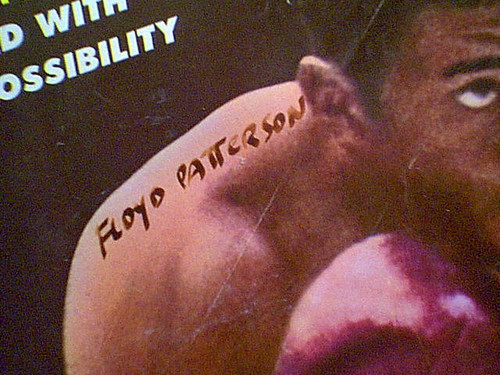