"The Ring" Magazine-December 1968-65 pages.This vintage Boxing magazine-which originally sold for fifty cents-features a color cover of Floyd Patterson and Jimmy Ellis....Patterson, Floyd, 19352006, American boxer, b. Waco, N.C. He was brought up in Brooklyn, N.Y., and was sent to the Wiltwyck School at Esopus, N.Y., an institution for emotionally disturbed boys, where he first began to box. As an amateur he won 40 of 44 fights, climaxing his career by winning (1952) the Olympic middleweight championship. As a professional, he lost only one fight before knocking out Archie Moore (1956) to become, at 21, the youngest man to win the heavyweight title. He successfully defended his title four times before losing it to Ingemar Johansson, of Sweden, in 1959. Patterson knocked out Johansson a year later to become the first man ever to regain the heavyweight title. In Sept., 1962, Patterson lost the championship to Sonny Liston by a first-round knockout. Despite the defeat, Patterson continued to box, finally retiring in 1972. Once director of New York state's off-track betting, he became a trainer in the 1990s......James Albert "Jimmy" Ellis (born February 24, 1940) is a retired boxer from Louisville, Kentucky. He fought in what some consider to be the greatest heavyweight era of all-time, which included Muhammad Ali, Joe Frazier, George Foreman, Jerry Quarry, Oscar Bonavena, and George Chuvalo. Ellis held the WBA World Heavyweight Championship from 1968 to 1970.The magazine has been autographed on the front cover by Floyd Patterson and Jimmy Ellis......BOTH MAGAZINE AND AUTOGRAPHS ARE IN VERY GOOD CONDITION. 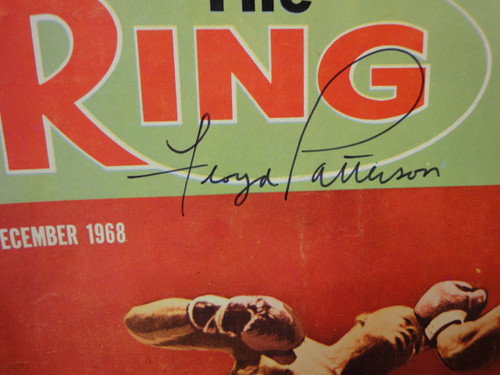