Fess Parker(Disneyland 43)-"Wringle Wrangle"/"The Ballad of John Colter"-45 RPM with picture sleeve. This vintage Disney 45 record features the 1956 Disney movie-"Westward Ho The Wagons". The movie stars Fess Parker and he is featured on the front and back covers of the picture sleeve in original scenes.Westward Ho, the Wagons! is a 1956 live-action Disney western film, aimed at family audiences. Based on Mary Jane Carr's novel Children of the Covered Wagon, the film was produced by Bill Walsh, directed by William Beaudine, and released to theatres on December 20, 1956 by Buena Vista.Summary: A wagon train must find another way than fighting to cross hostile Pawnee territory in 19th Century America.A small group of families join together to travel to Oregon in 1846. Their leader is ostensibly James Stephen (George Reeves), who has made the trip before, and is now bringing his family along. John Grayson (Fess Parker), known as Doc for his ambition to study medicine, however, proves to be the real leader of the wagon train. The pioneers deal with the elements and occasional raids, but after hostile Pawnees drive off their spare horses, they realize they may not make it to the Oregon Territory. While stopping at Fort Laramie, the pioneer children make friends with Sioux children. After the Sioux chief's son is injured in an accident, Doc Grayson helps heal him, earning the trust of the Sioux. As the story ends, the Sioux warriors escort the wagon train safely through Pawnee territory.The picture sleeve has been autographed on the front cover by Fess Parker with a fountain pen in blue.......CONDITION OF VINYL,PICTURE COVER AND AUTOGRAPH IS VG.FRONT COVER OF PICTURE SLEEVE HAS SOME CREASING............. 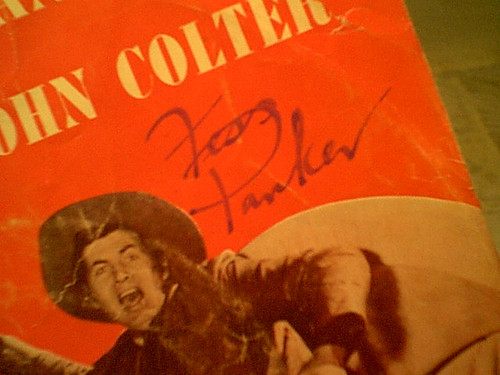