Fess Parker(Columbia 242)-"Ballad Of Davy Crockett"/"I Give My Love"-45 RPM with Picture cover.Davy Crockett is the first miniseries in the history of television though the term had not yet been coined. Airing on ABC in five one-hour episodes on the Disneyland series, the series stars Fess Parker in the title role and Buddy Ebsen as George Russell.The first three episodes of the miniseries were edited together as the 1955 theatrical film Davy Crockett, King of the Wild Frontier. The series and film are known for the catchy theme song, "The Ballad of Davy Crockett". The series was filmed in color at the Great Smoky Mountains National Park at the Gatlinburg, Tennessee.The picture cover has been autographed on the front cover by Fess Parker with a fountain pen in blue........CONDITION OF VINYL,PICTURE COVER AND AUTOGRAPH IS VG............... 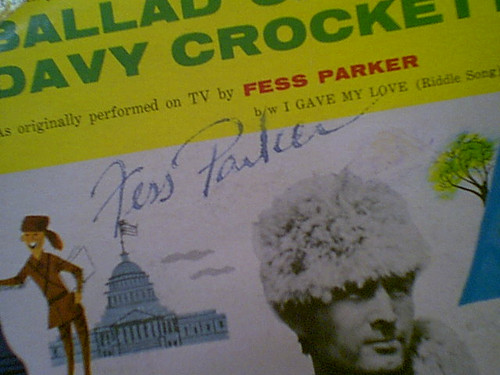