Don Patterson(Prestige 7430)-"Satisfaction!"-LP. Some tracks include-John Brown's Body,Satisfaction,Walkin plus more!Inspired to switch from piano to organ by Jimmy Smith, Don Patterson was one of the Hammond B-3's most bop-rooted players, able to play bluesy soul-jazz grooves or break out of the pocket for some nimble, sharply defined solo lines. Though he led numerous recording dates for Prestige and later Muse, he was best-known as Sonny Stitt's favorite organist, proving eminently compatible with the Parker-influenced saxophonist. Patterson was born in Columbus, OH, on July 22, 1936, and began studying piano as a child. His first major influence was Erroll Garner, and some of that flavor remained in his playing even after he heard Jimmy Smith in 1956 and changed instruments. Patterson made his professional debut on the organ in 1959, and played with a number of groups before Stitt discovered him. The association helped make Patterson's name, and he began recording for Prestige in 1964, often with a trio featuring guitarist Pat Martino and drummer Billy James. Patterson also played with numerous other soul-jazz sax greats over the course of the '60s, before settling in Gary, IN, toward the end of the decade.The LP has been autographed on the front by Don Patterson...............CONDITION OF VINYL,COVER AND AUTOGRAPH IS VG. 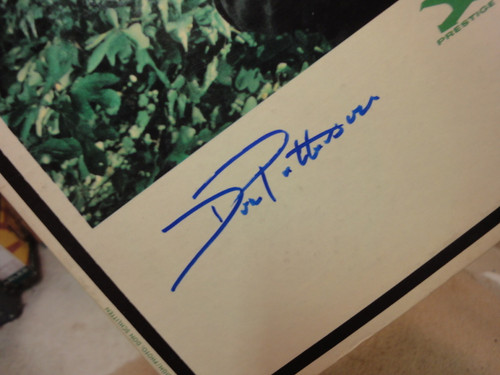