"Miss Piggy's Aerobique Exercis Workout Album"(WB 23717)-LP. This LP was released in 1982 and features The Muppets Miss Piggy with the voice of Frank Oz. The LP also features a color poster and instruction booklet. The LP also features Jim Henson as Kermit The Frog. Born in Hereford, England, Frank Oz (born Frank Oznowicz) graduated from California's Oakland City College during 1962 and joined the humans behind Jim Henson's fledgling Muppet group as a puppeteer the following year. He was part of the first-season cast of Saturday Night Live as the Mighty Favag and appeared in The Blues Brothers with John Belushi and Dan Aykroyd. After The Muppet Show went on the air in 1976, Oz became vice president of the Henson organization, and was responsible for the portrayals of Miss Piggy, Fozzie Bear, and Animal, among other characters, earning three Emmy Awards for his work on the show. He later served as a producer for The Great Muppet Caper (1980), directed by Henson, with whom he co-directed The Dark Crystal a year later. He later directed The Muppets Take Manhattan in 1984. Two years later, with Henson in the director's chair, Oz was one of the voices in Labyrinth. Moving outside of Henson's orbit, Oz directed the screen version of the musical Little Shop of Horrors (1986), Dirty Rotten Scoundrels (1988), What About Bob? (1991), and the Kevin Kline vehicle In & Out (1997). He also served as the voice of Yoda in five Star Wars movies: The Empire Strikes Back, Return of the Jedi, Star Wars: Episode I -- The Phantom Menace, Star Wars: Episode II -- Attack of the Clones, and Star Wars: Episode III - Revenge of the Sith.The LP has been autographed on the front cover by Frank Oz in blue.CONDITION OF VINYL IS VG.CONDITION OF COVER AND AUTOGRAPH IS WEAK VG. COVER HAS A CUT OUT NOTCH.INSIDE OF COVER HAS SOME MOLD WHICH DOES NOT AFFECT PHOTO OR AUTOGRAPJ................... 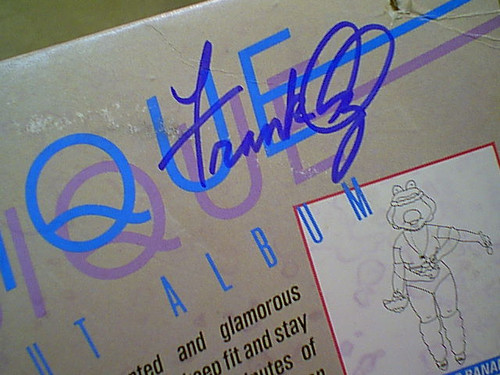