The Philadelphia Orchestra-Forty Sixth Season-1945-1946-Carnegie Hall-New York-Eugene Ormandy Conducting-6" X 9"-5 pages-Concert Program-Signed By Eugene Ormandy. Eugene Ormandy (November 18, 1899 – March 12, 1985) was a Hungarian-born American conductor and violinist, best known for his association with the Philadelphia Orchestra, as its music director. His 44-year association with the orchestra is one of the longest enjoyed by any conductor with any American orchestra. Ormandy made numerous recordings with the orchestra, and as guest conductor with European orchestras, and achieved three gold records and two Grammy Awards. His reputation was as a skilled technician and expert orchestral builder. The concert program has been autographed on the front cover by Eugene Ormandy...............BOTH CONCERT PROGRAM AND AUTOGRAPH ARE IN EXCELLENT CONDITION. 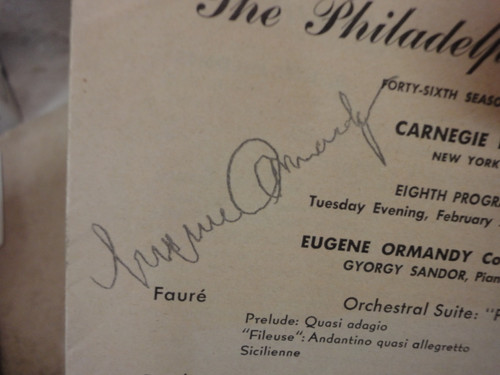