Playbill for The Majestic Theatre-"42nd Street"-1981-starring Jerry Orbach and Tammy Grimes-6" X 9"-130 pages-theatre program.42nd Street is a musical with a book by Michael Stewart and Mark Bramble, lyrics by Al Dubin, and music by Harry Warren. The 1980 Broadway production, directed by an ailing Gower Champion and orchestrated by Philip J. Lang won the Tony Award for Best Musical and became a long-running hit. The show was produced in London in 1984 (winning the Olivier Award for Best Musical) and its 2001 Broadway revival won the Tony for Best Revival.In July 1980, the musical premiered in out-of-town tryouts at the Kennedy Center for the Performing Arts in Washington, D.C. After six previews, the Broadway production opened on August 25, 1980 at the Winter Garden Theatre, eventually moving to the Majestic and then the St. James before it finally completed its 3,486-performance run, the eleventh longest run in Broadway history. (Frank Rich called this a sign of the "shift of power" on Broadway, as the show had to leave the Winter Garden to make way for Cats and the Majestic to accommodate The Phantom of the Opera.) The original cast included Jerry Orbach as Julian Marsh, Tammy Grimes as Dorothy Brock, Wanda Richert as Peggy Sawyer, and Lee Roy Reams as Billy Lawlor. Replacements later in the run included Barry Nelson, and Don Chastain as Julian, Elizabeth Allen, Dolores Gray, and Millicent Martin as Dorothy, and Lisa Brown (Nola Reardon of Guiding Light and Iva Snyder of As The World Turns) and Karen Ziemba as Peggy. The show's designers, Robin Wagner (sets), Theoni V. Aldredge (costumes), and Tharon Musser (lights) were the same team who had designed A Chorus Line.The Playbill has been autographed on the front cover by Jerry Orbach and Tammy Grimes............BOTH PLAYBILL AND AUTOGRAPHS ARE IN VERY GOOD CONDITION.................. 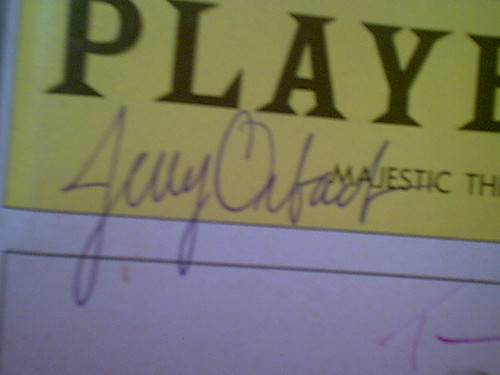