Eugene Ormandy(RCA Red Seal 2743-green vinyl)-"David Bowie Narrates Peter And The Wolf"-LP.Ormandy, Eugene 1899–1985, American conductor, b. Budapest. At the age of five Ormandy entered the Budapest Conservatory, where he studied the violin. Graduating in 1914, he became a member of the faculty. In 1921 he came to the United States, working as violinist, concertmaster, and later conductor of the Capitol Theatre Orchestra, New York City. After a successful guest appearance with the Philadelphia Orchestra, he was appointed conductor of the Minneapolis Symphony Orchestra in 1931. In 1936 he became associate conductor of the Philadelphia Orchestra and later its permanent conductor and music director (1938–80). Ormandy was known for superb romantic interpretations, excelling in works by Beethoven and 19th-century masters.The LP has been autographed on the front cover by Eugene Ormandy....CONDITION OF VINYL,COVER AND AUTOGRAPH IS VG.RECORD IS IN ORIGINAL INNER SLEEVE WITH ORIGINAL INSERT. 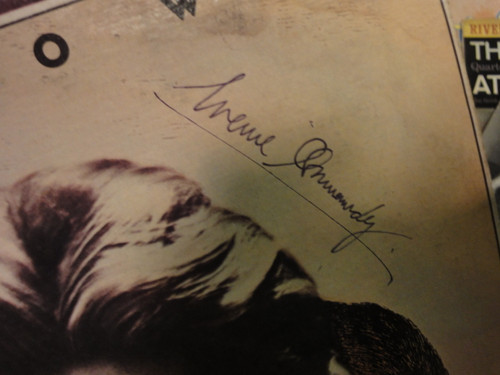