This is a set of two-8" X 10",black and white photos featuring Patrick O'Neal and Henry Silva in scenes from the 1967 movie-"Matchless".Patrick O'Neal made his first stage appearance in 1944 in his home state of Florida. While still a teenager, O'Neal was assigned to direct Signal Corps training shorts. Following his training at the Actors Studio and Neighborhood Playhouse, O'Neal entered the virgin territory of live TV, making appearances on such early anthologies as Gruen Playhouse. He played the romantic lead in his first film, 1954's The Mad Magician, thereafter settling into stuffed-shirt or villainous roles. It was fun to watch the usually reserved O'Neal make a meal of a mad-killer part obviously intended for Vincent Price in Chamber of Horrors (1966). It was also amusing to watch him bring a reluctant, droopy-eyed approach to the silly secret agentry of the 1967 spy spoof Matchless (1967). After appearing with Doris Day in Where Were You When the Lights Went Out (1966), O'Neal essayed the occasional role of dashing foreign correspondent on TV's The Doris Day Show (1968-73). Additional television assignments for O'Neal included his co-starring stint with Hazel Court in the 1957 comedy-melodrama series Dick and the Duchess (1957), the top-billed role of pathologist Daniel Coffee in the impressively produced videotaped medical series Diagnosis Unknown (1960), the straight-laced supporting role of lawyer Samuel Bennett in Kaz (1978) and the JR-type part of evil businessman Harlan Adams during the first (1983-84) season of Emerald Point NAS (Robert Vaughn took over the role in 1980). Making his Broadway debut in 1961, O'Neal appeared opposite Bette Davis the following year in his favorite part, the discredited, debauched Reverend Shannon in Tennessee Williams' Night of the Iguana. Going public by admitting his alcoholism in the 1970s, O'Neal appeared in a number of public-service announcements on behalf of AA; he also provided voiceovers for innumerable commercial products. When not performing, Patrick O'Neal pursued a successful second career as a restaurateur. One photo has been autographed on the front by Patrick O'Neal and one photograph has been autographed on the front by Henry Silva...................BOTH PHOTOS AND AUTOGRAPHS ARE IN VERY GOOD CONDITION............. 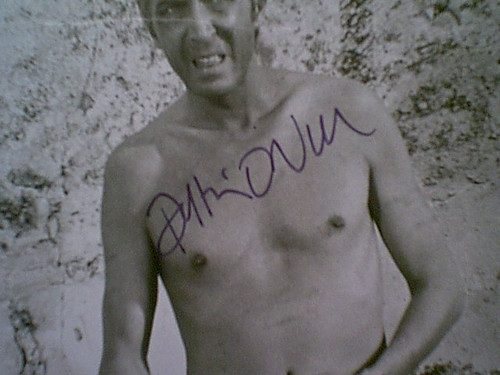