"Super Fly"-1972-Mass Media-8" X 11"-22 pages-Souvenir Movie Program. This vintage souvenir movie program-which originally sold for seventy five cents-features photos, Biographies and articles on the 1972 Movie-"Superfly" starring Ron O'Neal. Ron O'Neal (September 1, 1937 – January 14, 2004) was an American actor, director and screenwriter, who rose to fame in his role as Youngblood Priest, a New York cocaine dealer, in the blaxploitation film Super Fly (1972) and its sequel Super Fly T.N.T. (1973). O'Neal was also a director and writer for the sequel, and for the film Up Against the Wall. Super Fly is a 1972 American blaxploitation neo-noir crime drama film directed by Gordon Parks Jr. and starring Ron O'Neal as Youngblood Priest, an African American cocaine dealer who is trying to quit the underworld drug business. The film is well known for its soundtrack, written and produced by soul musician Curtis Mayfield. It was released on August 4, 1972.O'Neal reprised his role as Youngblood Priest in the 1973 film Super Fly T.N.T., which he also directed. Producer Sig Shore directed a second sequel, The Return of Superfly, released in 1990, with Nathan Purdee as Priest. A remake was released in 2018. The souvenir movie program has been autographed on the front cover by Ron O'Neal...................BOTH PROGRAM AND AUTOGRAPH ARE IN VERY GOOD CONDITION. 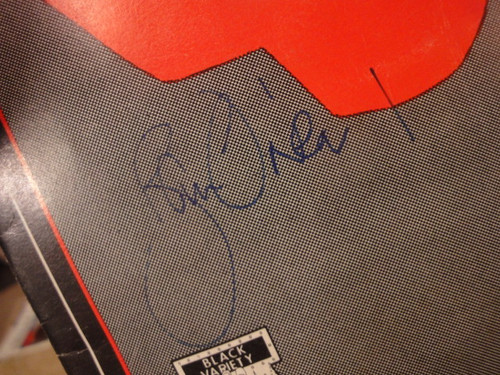