Oliver North-"One More Mission-Oliver North Returns To Vietnam"-1993-Zondervan Pub.-6" X 9"-280 pages-hardcover book -with jacket-with photos-First Edition-Signed By Author.Oliver Laurence North (born October 7, 1943 in San Antonio, Texas) is most well known for his involvement in the Iran-Contra Affair. Currently, he is an American conservative political commentator, host of "War Stories with Oliver North" on Fox News Channel. He is a 1968 graduate of the United States Naval Academy and was a career officer in the Marine Corps, retiring at the rank of Lieutenant Colonel after twenty years of service. During combat service in Vietnam, he was awarded the Silver Star, Bronze Star and two Purple Heart medals. North was at the center of national attention during the Iran-Contra Affair, during which he was a key Reagan administration official involved in the clandestine sale of weapons to Iran. The sale of these weapons served both to encourage the release of US hostages and to generate proceeds to support the Contra rebel group. Vice Admiral John M. Poindexter and his deputy, Lieutenant Colonel Oliver North secretly diverted to the Nicaraguan Contras millions of dollars in funds received from a secret deal - the sales of anti-tank and anti-aircraft missiles to Iran - in spite of Reagan's public pledge not to deal with the nation.The book has been autographed on the title page by Oliver North....BOTH BOOK AND AUTOGRAPH ARE IN EXCELLENT CONDITION............. 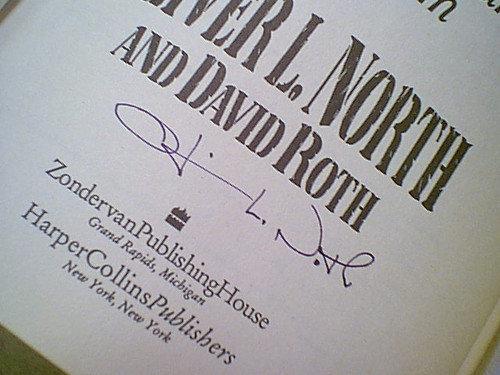