This item is a 3 1/2" X 5 1/2" black and white photo of actor Laurence Olivier in a scene from the movie-"Richard III".Richard III is a 1955 British film adaptation of William Shakespeare's historical play of the same name, also incorporating elements from his Henry VI, Part 3. It was directed and produced by Laurence Olivier, who also played the lead role. The cast includes many noted Shakespearean actors, including a quartet of acting knights. The film depicts Richard plotting and conspiring to grasp the throne from his brother King Edward IV, played by Sir Cedric Hardwicke. In the process, many are killed and betrayed, with Richard's evil leading to his own downfall. The prologue of the film states that history without its legends would be "a dry matter indeed", implicitly admitting to the artistic licence that Shakespeare applied to the events of the time.The photo has been autographed on the front by Laurence Olivier...........BOTH PHOTO AND AUTOGRAPH ARE IN VERY GOOD CONDITION. 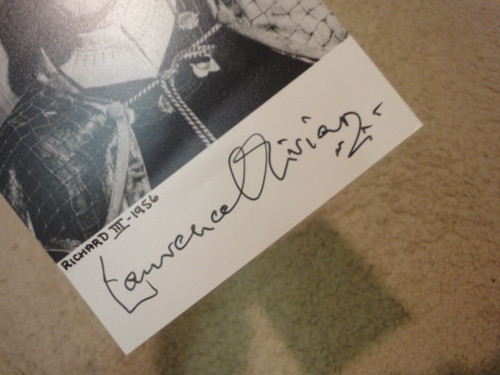