This item is an 8" X 10",black and white photo of Donald O'Connor and Debbie Allen as they hosted the 1986-"40th Annual Tony Awards".The photo has an original dated byline which explains the photo and gives date of broadcast.The son of a stage acrobat, American actor/dancer/singer Donald O'Connor was hoofing away as a child in his family's vaudeville act. He was discovered for films in 1938's Sing, You Sinners, spending the next few years in movies usually playing "the star as a child"  that is, cast as the younger version of the film's leading man for prologue and flashback sequences. A 1941 Universal contract led to a string of peppy medium-budget musicals with such pure-forties titles as Get Hep to Love (1941) and Are You With It? (1949); O'Connor's most frequent costar was another teenage vaudeville vet, Peggy Ryan. In 1950, O'Connor was cast in the non-dancing role of a hapless army private who can't convince anyone that a mule can talk in Francis (1950). The film was a major moneymaker, leading Universal to inaugurate a Francis series starring O'Connor, Francis the Mule, and Francis' voice, Chill Wills. O'Connor bailed out before the final film in the series, Francis in the Haunted House (1956), complaining that the mule was getting more fan mail than he was. During the Francis epics, O'Connor was loaned to MGM for what is regarded as his finest film role, happy-go-lucky Cosmo Brown in Singin' in the Rain (1952). If he'd never made another film, O'Connor would be a musical-comedy immortal solely on the basis of his Rain setpiece, the athleticly uproarious Make 'Em Laugh (1952). When the sort of musicals in which he specialized went into a Hollywood eclipse, O'Connor concentrated on TV and nightclubs, save for a few less than satisfying cinematic assignments such as The Buster Keaton Story (1957) and the Italian-made curiosity The Wonders of Alladin (1961). When O'Connor returned to films for 1965's That Funny Feeling it was in support of the musical flavor-of-the-decade Bobby Darin. In 1967, O'Connor tried his hand at a syndicated talk-variety program, where he proved excellent as usual at performing but ill at ease as an interviewer. The photo has been autographed on the front by Donald O'Connor and Debbie Allen.................CONDITION OF PHOTO,BYLINE AND AUTOGRAPHS IS EXCELLENT........................... 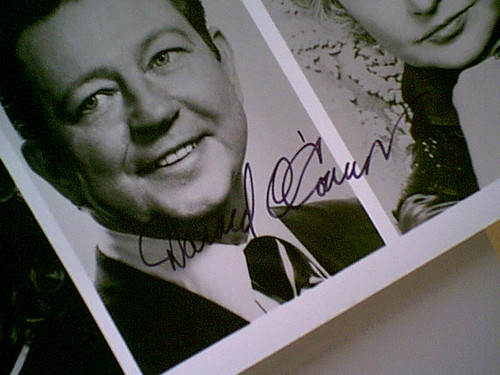