This item is an 8" X 10",black and white photo of Tony Randall and Jack Klugman in the television series-"The Odd Couple".The Odd Couple, formally titled onscreen Neil Simon's The Odd Couple, is an American television situation comedy broadcast from September 24, 1970 to March 7, 1975 on ABC. It stars Tony Randall as Felix Unger and Jack Klugman as Oscar Madison, and was the first of several developed by Garry Marshall for Paramount Television. The show is based upon the play of the same name, which was written by Neil Simon.Felix and Oscar are two divorced men. Felix is neat and tidy while Oscar is sloppy and casual. They share a Manhattan apartment, and their different lifestyles inevitably lead to conflicts and laughs.In 1997, the episodes "Password" and "The Fat Farm" were ranked #5 and #58 on TV Guide's 100 Greatest Episodes of All Time. The show received three nominations for the Primetime Emmy Award for Outstanding Comedy Series. Its fourth season, from 197374, remains the most recent nominee for a show that aired during a Friday time slot.The photo has been autographed on the front by Tony Randall and Jack Klugman.........BOTH PHOTO AND AUTOGRAPHS ARE IN VERY GOOD CONDITION. 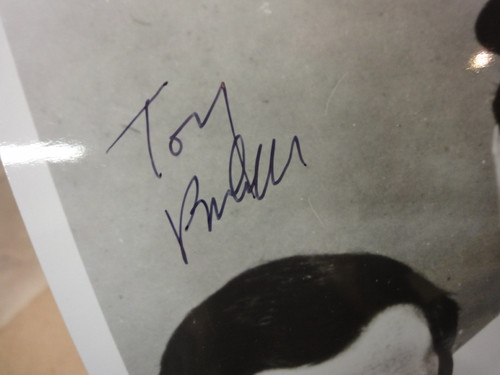