"Music From Pal Joey"(Tops 1607)-LP. This vintage LP features a color cover photo of actress Kim Novak.Kim Novak (born February 13, 1933) is an American actress who was one of America's most popular movie stars in the late 1950s. She is perhaps best known for her performance in Alfred Hitchcock's Vertigo (1958).After playing Madge Owens in Picnic (1955) opposite William Holden, Novak won a Golden Globe for Most Promising Newcomer and for World Film Favorite. She was also nominated for the British BAFTA Film Award for Best Foreign Actress. She played Molly in The Man with the Golden Arm (1955) opposite Frank Sinatra and Eleanor Parker on loan-out to United Artists. The movie was a big hit. She was paired opposite Sinatra again in Pal Joey (1957), which also starred Rita Hayworth. Her popularity became such that she made the cover of the July 29, 1957, issue of Time Magazine. That same year, she went on strike, protesting at her current salary of $1,250 per week. In 1958, Novak appeared in a dual role in Hitchcock's classic thriller Vertigo opposite James Stewart. She played the dual roles of the elegant, troubled, wealthy blonde Madeleine Elster and the earthy shop girl brunette, Judy Barton. Today, the film is often considered a masterpiece of romantic suspense, and Novak's turn is possibly the best-known and most admired of her career. She followed Vertigo with her role as Gillian Holroyd in Bell, Book and Candle (1958) opposite James Stewart and Jack Lemmon, with Ernie Kovacs, Hermione Gingold, and Elsa Lanchester, a comedy tale of modern-day witchcraft that did not do well at the box-office, yet today is a popular favorite. Although some believe that by the early 1960s Novak's career had begun to slide, in fact she refused to accept many of the sexpot, glamour girl roles she was offered. Yet, during the same decade, she also turned down several strong roles including Breakfast at Tiffany's, The Hustler, Days of Wine and Roses, and The Sandpiper. She played the vulgar waitress Mildred Rogers in a remake of Somerset Maugham's drama Of Human Bondage (1964) opposite Laurence Harvey and Robert Morley, and received good reviews. She showed a cunning sense of humor in Billy Wilder's cult classic Kiss Me, Stupid (1964) opposite Dean Martin, though the film was critically panned. The LP has been autographed on the front cover by Kim Novak in blue..................CONDITION OF VINYL,COVER AND AUTOGRAPH IS VG.CORNER OF COVER HAS A BB HOLE.......... 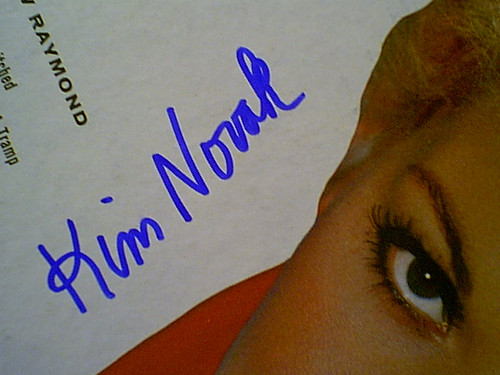