This item is an 8" X 10",black and white photo of actor Jack Nicholson in a scene from the 1981 Paramount Movie-"The Postman Always Rings Twice".Bob Rafelson's remake of 1946's The Postman Always Rings Twice, with a screenplay by the award-winning playwright David Mamet, stars Jack Nicholson as Frank Chambers, a depression-era drifter who ends up at a diner run by Nick Papadakis (John Colicos), who offers Frank a job. Frank takes him up on the offer, but quickly begins a torrid affair with Nick's wife Cora (Jessica Lange). The adulterous lovers soon hatch a plan to kill Nick and share in the insurance payout. The second big-screen adaptation of the James M. Cain novel, the film garnered a certain degree of notoriety for the explicit sex scenes between Lange and Nicholson.The photo has been autographed on the front by Jack Nicholson.........BOTH PHOTO AND AUTOGRAPH ARE IN VERY GOOD CONDITION............ 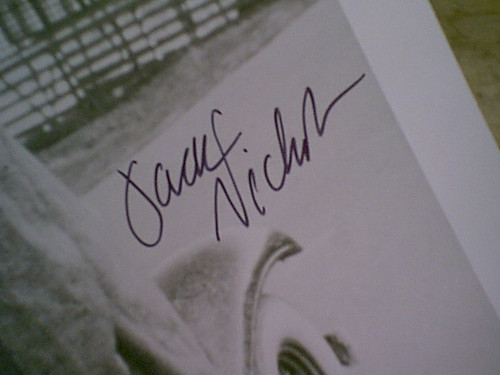