This item is an original press kit which features the 1983 movie-"Terms Of Endearment" starring Jack Nicholson,Shirley MacLaine,Debra Winger and Jeff Daniels. This press kit was a promotional item only and was not available for retail sale. The press kit consists of 24-8" X 10",black and white photos of original scenes from the movie.Some of the photos have original dated bylines.Terms of Endearment covers three decades in the lives of widow Aurora Greenway (Shirley MacLaine) and her daughter Emma (Debra Winger). Fiercely protected by Aurora throughout childhood, Emma runs into resistance from her mother when she marries wishy-washy college teacher Flap (Jeff Daniels). Aurora is even more put out at the prospect of being a grandmother, though she grows a lot fonder of her three grandkids than she does of her son-in-law. Flap proves that Aurora's instincts were on target when he enters into an affair with a student (Kate Charleson). Meanwhile, Emma finds romantic consolation with an unhappily married banker (played by John Lithgow, who registers well in a rare "nice guy" performance). As for Aurora, she is ardently pursued by her next-door neighbor, boisterous astronaut Garrett Breedlove (Jack Nicholson). After 75 minutes or so of pursuing an episodic, semi-comic plotline, the film abruptly shifts moods when Emma discovers that she has terminal cancer. Terms of Endearment won Academy Awards for Best Picture, Best Director and Best Screenplay for TV veteran James L. Brooks making his first feature film, Best Actress for MacLaine, and Best Supporting Actor for Nicholson. It was followed by a sequel, The Evening Star (1996), which again featured MacLaine as Aurora. The press kit has been autographed on a photo by Jack Nicholson,Shirley MacLaine,Debra Winger and Jeff Daniels...........BOTH PRESS KIT AND AUTOGRAPHS ARE IN VERY GOOD CONDITION............ 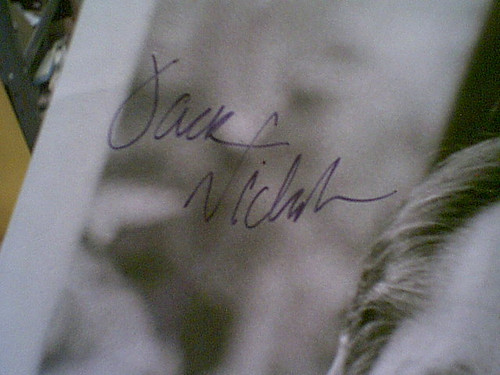