Rolling Stone Magazine/Newspaper April 16, 1981-Issue No. 341-107 pages. This vintage Rolling Stone Magazine-which originally sold for $1.50-features a color cover photo of Jack Nicholson plus an article with photos.Jack Nicholson has been nominated for 12 Academy Awards, and he's won three times: for One Flew Over the Cuckoo's Nest (1975, from the book by Ken Kesey), for Terms of Endearment (1984), and for As Good As It Gets (1997, with Helen Hunt). His crooked leer and wild-man attitude are famous, but Jack Nicholson is also known as a powerful dramatic actor. He first made a splash as hippie lawyer in Easy Rider (1969, with Peter Fonda and Dennis Hopper). He has played many high-profile roles in the years since; the most famous may be the dapper, cynical detective Jake Gittes in the drama Chinatown (1974, opposite Faye Dunaway). He also starred as the insane asylum rebel McMurphy in One Flew Over the Cuckoo's Nest, as the corrupt marine colonel who shouts "You can't handle the truth!" in A Few Good Men (1992, with Demi Moore and Tom Cruise), as labor leader Jimmy Hoffa in Hoffa (1992), and as the jovial villain The Joker in the 1989 film Batman (with Michael Keaton as Batman). As the decades passed, Jack Nicholson somehow shifted from rowdy iconoclast into beloved movie industry icon, a grinning and unapologetic hedonist whom the cameras always seemed to find at the Oscars or other Hollywood events. He has remained a bankable star into the 21st century, appearing in films like About Schmidt (2002), Something's Gotta Give (2003, with Diane Keaton and Keanu Reeves), and the Oscar-winning Martin Scorsese crime drama The Departed (2006).The Rolling Stone has been autographed on the front cover by Jack Nicholson..................BOTH ROLLING STONE AND AUTOGRAPH ARE IN VERY GOOD CONDITION. 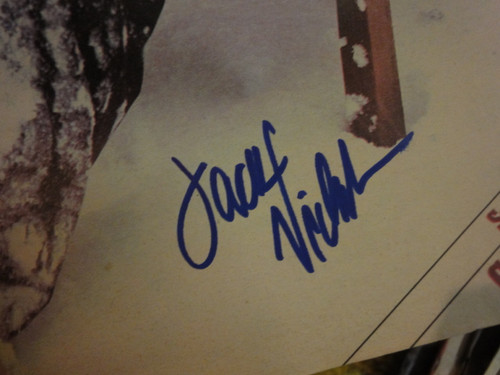