Original Soundtrack-"Five Easy Pieces"(Epic 30456)-LP. This vintage soundtrack LP features the 1970 Movie-"Five Easy Pieces" starring Jack Nicholson.A disaffected man seeks a sense of identity in one of the key films of Hollywood's 1970s New Wave. Once a promising pianist from a family of classical musicians, Bobby Eroica Dupea (Jack Nicholson, in his first major starring role) leads a blue-collar life as an oil rigger, living with needy waitress girlfriend Rayette (Karen Black) and bowling with their friends Elton (Billy "Green" Bush) and Stoney (Fannie Flagg). Feeling suffocated by responsibilities, Bobby seeks out his sister, Tita (Lois Smith), and, discovering that his father is gravely ill, he reluctantly heads back to the patrician family compound in Puget Sound with a pregnant Rayette in tow. After a road trip featuring a harangue from hitchhiker Palm (Helena Kallianiotes) about filth, and Bobby's ill-fated attempt to make a menu substitution in a diner, he tucks Rayette away in a motel before heading to the house. There Bobby seduces his uptight brother Carl's cultured fiancée, Catherine (Susan Anspach), but Rayette shows up unexpectedly. As Rayette's crassness collides with the snobbery of the Dupea circle, Bobby loses patience with both sides. After trying to reconcile with his mute father, Bobby departs, unwilling to give in to either destiny. Director Bob Rafelson and screenwriter Adrien Joyce (aka Carole Eastman) used the creative control afforded by the low budget to craft a European-influenced character study, catching a cultural mood of anomie and resentment as it was embodied in Bobby. Neither older generation nor hippie, Bobby fits in nowhere, and his desire for independence conflicts with his emotional emptiness. Nicholson's nuanced performance of simmering frustration resonated with 1970 audiences caught between Nixon's "silent majority" and the troubled counterculture; a substantial hit, Five Easy Pieces was nominated for several Oscars, including Best Picture and Best Actor, and established Nicholson as a star. Offering no "easy" answers to Bobby's existential crisis, Five Easy Pieces is one of the pre-eminent films in the early-'70s cycle of alienated American art movies, as even the fantasy of rebellion is reduced to merely running away.The LP has been autographed on the front cover by jack Nicholson............CONDITION OF VINYL,COVER AND AUTOGRAPH IS VG.FRONT COVER HAS A LITTLE WEAR AND AN UPPER LEFT CUT CORNER.RECORD IS IN ORIGINAL INNER SLEEVE............ 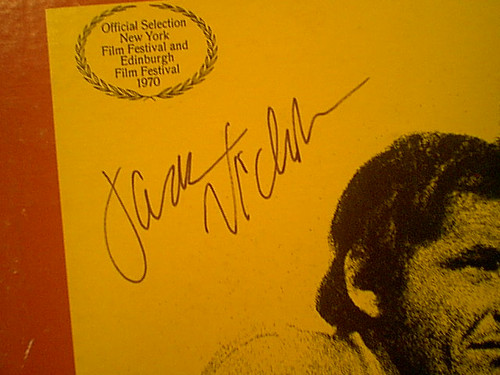