This item is an 8" X 10",black and white photo of Jack Nicholson and Faye Dunaway in a scene from the 1974 Movie-"Chinatown"."You may think you know what you're dealing with, but believe me, you don't," warns water baron Noah Cross (John Huston), when smooth cop-turned-private eye J.J. "Jake" Gittes (Jack Nicholson) starts nosing around Cross's water diversion scheme. That proves to be the ominous lesson of Chinatown, Roman Polanski's critically lauded 1974 revision of 1940s film noir detective movies. In 1930s Los Angeles, "matrimonial work" specialist Gittes is hired by Evelyn Mulwray (Faye Dunaway) to tail her husband, Water Department engineer Hollis Mulwray (Darrell Zwerling). Gittes photographs him in the company of a young blonde and figures the case is closed, only to discover that the real Mrs. Mulwray had nothing to do with hiring Gittes in the first place. When Hollis turns up dead, Gittes decides to investigate further, encountering a shady old-age home, corrupt bureaucrats, angry orange farmers, and a nostril-slicing thug (Polanski) along the way. By the time he confronts Cross, Evelyn's father and Mulwray's former business partner, Jake thinks he knows everything, but an even more sordid truth awaits him. When circumstances force Jake to return to his old beat in Chinatown, he realizes just how impotent he is against the wealthy, depraved Cross. "Forget it, Jake," his old partner tells him. "It's Chinatown." Reworking the somber underpinnings of detective noir along more pessimistic lines, Polanski and screenwriter Robert Towne convey a '70s-inflected critique of capitalist and bureaucratic malevolence in a carefully detailed period piece harkening back to the genre's roots in the 1930s and '40s. Gittes always has a smart comeback like Humphrey Bogart's Sam Spade and Philip Marlowe, but the corruption Gittes finds is too deep for one man to stop. The photo has been autographed on the front by Jack Nicholson and Faye Dunaway......BOTH PHOTO AND AUTOGRAPHS ARE IN VERY GOOD CONDITION............................... 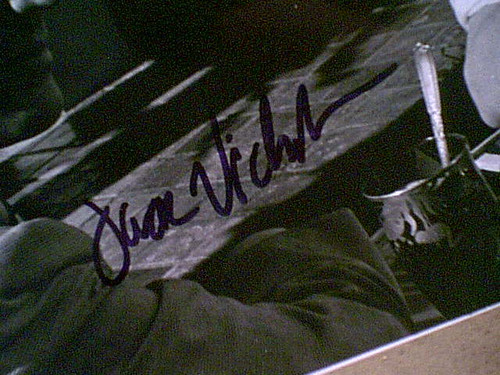