This item is a 7" X 9 1/2",black and white photo of actor Jack Nicholson in a scene from the 1981 Movie-"The Postman Always Rings Twice".Bob Rafelson's remake of 1946's The Postman Always Rings Twice, with a screenplay by the award-winning playwright David Mamet, stars Jack Nicholson as Frank Chambers, a depression-era drifter who ends up at a diner run by Nick Papadakis (John Colicos), who offers Frank a job. Frank takes him up on the offer, but quickly begins a torrid affair with Nick's wife Cora (Jessica Lange). The adulterous lovers soon hatch a plan to kill Nick and share in the insurance payout. The second big-screen adaptation of the James M. Cain novel, the film garnered a certain degree of notoriety for the explicit sex scenes between Lange and Nicholson.The photo has been autographed on the front by Jack Nicholson............BOTH PHOTO AND AUTOGRAPH ARE IN EXCELLENT CONDITION....... 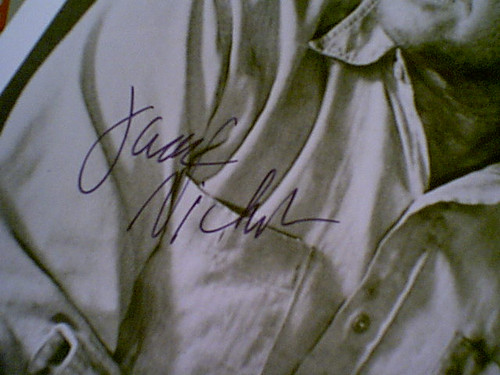