This item is an 8" X 10",black and white photo of actor Jack Nicholson in a scene from the 1975 Movie-"The Passenger".The mutual admiration between actor Jack Nicholson and director Michelangelo Antonioni resulted in the psychological drama The Passenger. Nicholson plays David Locke, a disillusioned American reporter who is sent on a grueling mission to North Africa. When he stumbles across the body of a dead man, Locke, long desirous of starting life over again, assumes the corpse's identity. He soon discovers that the man he's pretending to be is involved in gun running on behalf of a terrorist group. Making the acquaintance of a mysterious woman (Maria Schneider), he finds a kindred spirit  a woman as "lost" as he. The photo has been autographed on the front by Jack Nicholson. The autograph reads-"Regards Jack Nicholson"..........BOTH PHOTO AND AUTOGRAPH ARE IN VERY GOOD CONDITION...................... 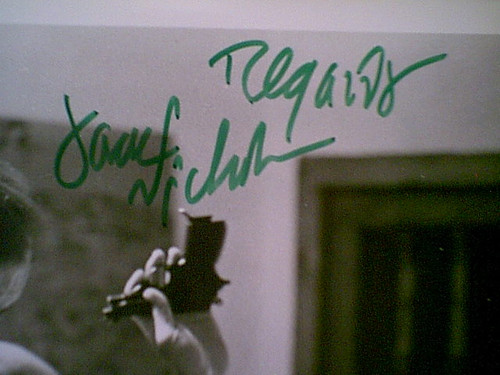