This item is an 8" X 10",black and white photo of actor David Niven in a scene from the 1962 Movie-"The Best Of Enemies".In this military comedy, Maj. Richardson (David Niven) and Lt. Burke (Michael Wilding) are two British soldiers on a recognizance mission over Ethiopia in 1941 when their plane crashes in the desert. Capt. Blasi (Alberto Sordi), an Italian officer, finds the Englishmen and offers to help them: he'll let them go if they allow him and his men to take over an old fort nearby and stay there without being bothered. Richardson and Burke agree, and they return to their base of operations, only to discover that they've been ordered to attack the fort and capture Blasi and his men. Richardson considers himself a man of his word and doesn't care for this duty; in time, the two men become friends and exchange banter as they take turns capturing one another. Remarkably enough, Italian actor Alberto Sordi didn't speak English when he made this film, and he learned all his dialogue phonetically.The photo has been autographed on the front by David Niven with a fountain pen in black.................BOTH PHOTO AND AUTOGRAPH ARE IN VERY GOOD CONDITION.................... 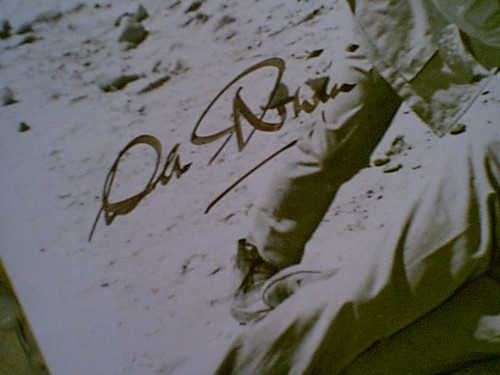