"Our Navy"-September 1, 1946-8" X 11"-60 pages-magazine. This vintage magazine-which originally sold for twenty five cents-features a color cover photograph of Admiral Chester Nimitz plus an article with photos. The magazine is devoted entirely to The United States Navy with interesting vintage articles and photos.....Nimitz, Chester William, 18851966, American admiral, b. Fredericksburg, Tex. A graduate of Annapolis, he was chief of staff to the commander of the submarine force of the Atlantic Fleet in World War I. In 1939, he was made chief of the Bureau of Navigation, and, after the attack on Pearl Harbor, he succeeded (1941) Husband E. Kimmel as commander of the Pacific Fleet. Admiral Nimitz headed the naval fighting forces in the Pacific throughout World War II. In Dec., 1944, he was made fleet admiral (five-star admiral) and a year later succeeded Ernest J. King as chief of naval operations. After he retired (Dec. 1947) from the navy, he headed (1949) the United Nations commission in the dispute over Kashmir. This magazine-"Our Navy"- has been signed by Chester Nitmitz to a smartly mounted signature slip on the cover of the magazine. The signature slip measures approximately 1" X 2 1/2"..................BOTH MAGAZINE AND AUTOGRAPH ARE IN VERY GOOD CONDITION. 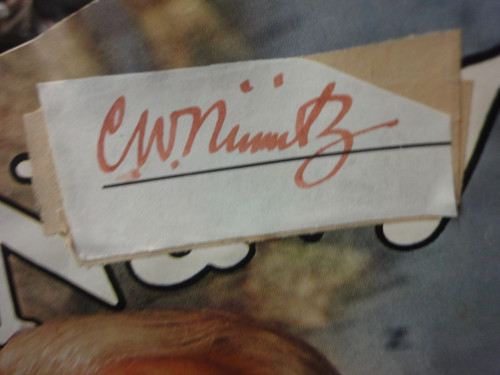