This item is an 8" X 10",black and white photo of actor Paul Newman in a scene from one of his famous movies.Paul Leonard Newman (January 26, 1925September 26, 2008)was an American actor, film director, entrepreneur, humanitarian and auto racing enthusiast. He won numerous awards, including an Academy Award for his performance in the 1986 Martin Scorsese film The Color of Money and eight other nominations three Golden Globe Awards, a BAFTA Award, a Screen Actors Guild Award, a Cannes Film Festival Award, an Emmy award, and many honorary awards. He also won several national championships as a driver in Sports Car Club of America road racing, and his race teams won several championships in open wheel IndyCar racing.Newman was a co-founder of Newman's Own, a food company from which Newman donated all post-tax profits and royalties to charity. As of October 2008, these donations had exceeded US $250 million.On September 26, 2008, Newman died at his longtime home in Westport, Connecticut, of complications arising from lung cancer.The photo has been autographed on the front by Paul Newman....BOTH PHOTO AND AUTOGRAPH ARE IN VERY GOOD CONDITION.RIGHT SIDE OF PHOTO HAS A CREASE WHICH DOES NOT AFFECT PHOTO OR AUTOGRAPH.............. 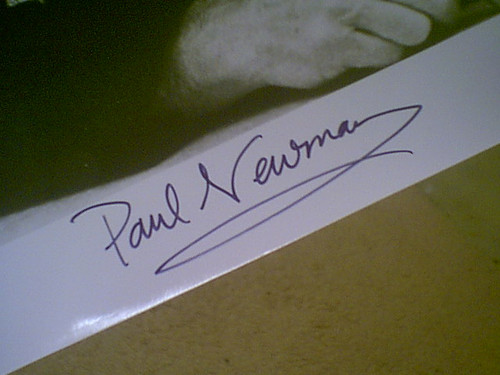