This item is a 10" X 12",color lithograph photo of actor Paul Newman. The color lithograph photo has been mounted on a 10" X 12" piece of photography paper.Blue-eyed, charming and rascally, Paul Newman was one of the biggest movie stars of the 20th century. With co-star Robert Redford he was in two of the biggest box office successes in history, 1969's Butch Cassidy and the Sundance Kid (Newman played Butch and Redford was Sundance) and 1973's The Sting. Newman was Oscar-nominated as best actor eight times, for films including Cat on a Hot Tin Roof (1958, opposite Elizabeth Taylor), The Hustler (1961, co-starring George C. Scott), and Cool Hand Luke (1967). He went Oscar-less until 1985, when he was given an honorary Academy Award for his distinguished body of work; the next year he won the best actor Oscar for his role in Martin Scorsese's The Color of Money (1986, co-starring Tom Cruise). He also directed several films, including Rachel, Rachel (1968), Sometimes A Great Notion (1971, based on the novel by Ken Kesey) and Harry and Son (1984). With his friend A.E. Hotchner, he founded the "Newman's Own" line of salad dressing in 1982, with the proceeds going to charity. The company expanded into many other foods (including "Fig Newman" cookies), and by the time of Newman's death had donated $200 million dollars to charities worldwide.The photo has been autographed on the front by Paul Newman.............BOTH PHOTO AND AUTOGRAPH ARE IN VERY GOOD CONDITION.......... 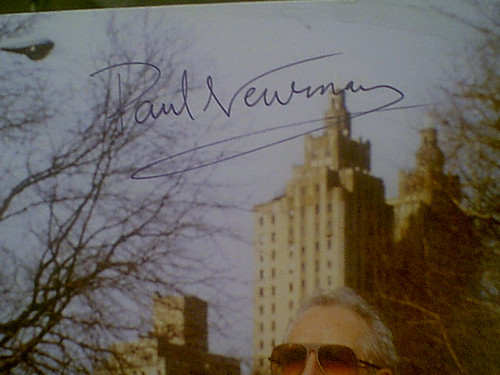