Saturday Evening Post Magazine-June 6, 1964-78 pages. This vintage Post Magazine-which originally sold twenty five cents-features a full color cover photo of actress Julie Newmar-"Celebrities favorite cookout recipes".American actress Julie Newmar's father was a college instructor and her mother was a former Ziegfeld dancer. This odd mix may explain why Julie complemented her dancing and acting career with offscreen intellectual pursuits. A lifelong student of ballet, Newmar was accepted as a dancer by the Los Angeles Opera Comany at age 15, and before her UCLA enrollment was under way she'd left college to try her luck in films. A stint as a gold-painted exotic dancer in Serpent of the Nile (1954) was usually conveniently ignored by Newmar's biographers, who preferred to list Seven Brides for Seven Brothers (1954) as her screen debut. From here it was on to Broadway for a featured dance in the musical Can-Can, then to the sizable but nonspeaking role of Stupefyin' Jones in Li'l Abner. It was for Newmar's performance as a Swedish sexpot in the genteel farce The Marriage-Go-Round that the actress attained true stardom - and also won a Tony Award. Recreating her stage roles for the film versions of Li'l Abner (1959) and Marriage-Go-Round (1961), Newmar spent the next few years dividing her time between stage work and TV guest spots (she played the Devil in the 1963 "Twilight Zone" episode "Of Late I Think of Cliffordville"). In 1964, Newmar was cast as a beautiful robot on the TV sitcom "My Living Doll," a series that languished opposite "Bonanza" and barely got through the season. According to Newmar, she accepted her best-remembered TV role, that of Catwoman on the weekly series Batman on the advice of her brother, a Harvard fellow in Physics who, along with his classmates, was a rabid Batman fan. Newmar played Catwoman for two seasons, but contractual committments kept her from appearing in the 1966 feature film version of Batman, wherein her role was taken over by Lee Meriwether. The magazine has been autographed on the front cover by Julie Newmar in black......................... BOTH MAGAZINE AND AUTOGRAPHS ARE IN VERY GOOD CONDITION........... 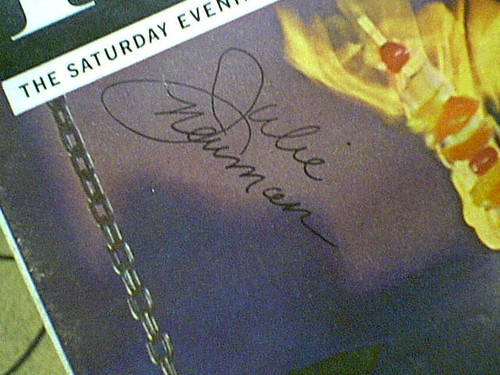