This item is an 11" X 14" page from a Saturday Evening Post Magazine dated March 17, 1923. PLEASE NOTE-this is the page only-there is no complete magazine. The magazine page feautres an advertisement for the New Nash Carriole Automobile built by The Nash Motor Company Kenosha Wisconsin. Charles Williams Nash (January 28, 1864 – June 6, 1948) was an American automobile entrepreneur who served as an executive in the automotive industry. He played a major role in building up General Motors as its 5th President. In 1916, he bought Thomas B. Jeffery Company, makers of the popular Rambler automobile, renamed it Nash Motors, and played an independent role in an automobile industry increasingly dominated by the Big Three: General Motors, Ford, and Chrysler. His profits came from focusing on one well-designed car in the upper medium price range. He bought several distressed companies in Wisconsin, merging them and installing advanced managerial accounting procedures while cutting costs and focusing on long-term growth. He retired as president in 1932 but remained chairman of the board. His major acquisition was the merger in 1937 with the Kelvinator Company, which made refrigerators. During World War II, Nash-Kelvinator greatly expanded to manufacture aircraft engines and parts.......Nash Motors-Nash learned that the heirs of the Jeffery Motor Company of Kenosha, Wisconsin, were anxious to retire. It was best known for its Rambler brand of cars and numerous innovations. Nash bought out the pioneering automaker in August 1916 with a down payment check of half million dollars and the total deal worth $5 million (some reports indicate the price was $9 million). One of the first major investors was Alfred P. Sloan. While Jeffery Motors had total stock of $3 million, the newly incorporated Nash Motors became a major force with a capital stock of almost $24 million on 29 July 1916. In 1917, he renamed the company Nash Motors. The 1917 Nash Model 671 was the first automobile to bear the name of the new company's founder. Nils Erik Wahlberg, a former GM engineer, developed new cars and engines for the 1918 model year. Nash Motors became successful almost immediately, with sales totaling 31,008 trucks and cars by 1919.The magazine page has been autographed on the front by C. W. Nash..............BOTH  MAGAZINE PAGE AND AUTOGRAPH ARE IN EXCELLENT CONDITION. 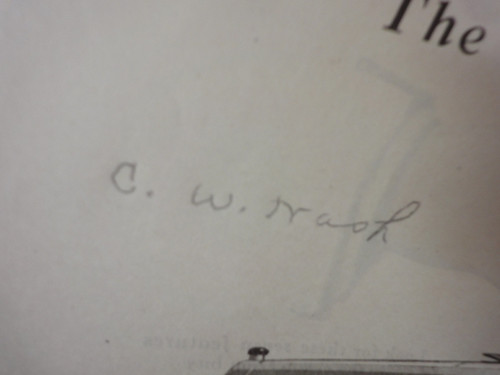