TV Guide Magazine-June 3-9, 1961. This vintage TV Guide Magazine-which originally sold for fifteen cents-features a color cover photo plus article of "Naked City's" Paul Burke and Horace McMahon.Naked City is a police drama series which aired from 1958 to 1963 on the ABC television network. It was inspired by the 1948 motion picture of the same name, and mimics its dramatic "semi-documentary" format.Naked City first aired in 1958 as a half-hour series starring James Franciscus and John McIntire playing, respectively, Detective Jimmy Halloran and Lt. Dan Muldoon  the same characters as in the 1948 film. While critically acclaimed, the series did not garner high ratings. Midway through the season, McIntire quit the show because of his desire to leave New York and move back to the West Coast. His departure was handled by dramatically killing off his character in the opening scene of the episode "The Bumper". Horace McMahon was then introduced in the same episode as his more crusty replacement, Lieutenant Mike Parker. Even with the cast change, the show was cancelled by ABC at season's end. One of the show's sponsors (Liggett & Myers), along with production staff, successfully lobbied the network to revive the show as an hour-long series, which premiered in 1960. The 1960 version of the series featured Paul Burke as "Detective Adam Flint", a sensitive and cerebral cop in his early thirties who does much of the legwork in the episodes. The preceding season, Burke had appeared with David Hedison in the short-lived NBC espionage drama, Five Fingers. Horace McMahon returned as Lieutenant Mike Parker as did Harry Bellaver as the older, mellow Sgt. Frank Arcaro. Also part of the cast was Nancy Malone as Adam Flint's aspiring actress girlfriend, Libby.The TV Guide Magazine has been autographed on the front cover by Paul Burke and Horace McMahon................BOTH MAGAZINE AND AUTOGRAPHS ARE IN VERY GOOD CONDITION................. 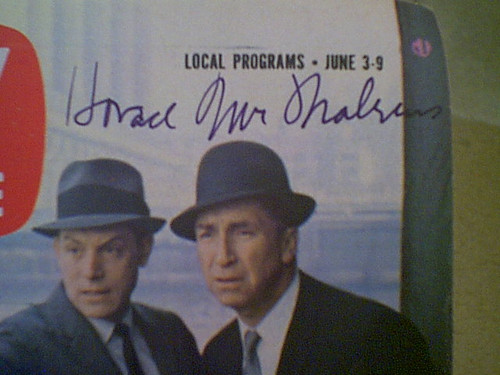