"My Favorite Martian"-Gold Key-Nobember 1965-No. 6-Color Comic Book. This vintage comic book-which originally sold for twelve cents-features a color cover of BIll Bixby and Ray Walston in a scene from "My Favorite Martian". My Favorite Martian is an American science fiction sitcom that aired on CBS from September 29, 1963, to May 1, 1966, for 107 episodes. The show stars Ray Walston as Uncle Martin (the Martian) and Bill Bixby as Tim O'Hara. The first two seasons, totaling 75 episodes, were in black and white, while the 32 episodes of season three were in color. The first two seasons were filmed in black-and-white (at Desilu), but the final season was shot in color (at MGM), resulting in minor changes in the set and the format of the show. In addition to the extraterrestrial powers indicated in the first two seasons, Martin was able to do much more in the final season, such as stimulating beard growth to provide Tim and himself with quick disguises, and levitating using his nose. Brennan's boss, the police chief, was involved in many episodes in the third season, generally as a device to humiliate the overzealous detective Brennan.My Favorite Martian, which premiered in the fall of 1963, was the first of "fantasy" situation comedies prevalent on American television in the mid-1960s featuring characters who could do extraordinary things, predating My Living Doll (1964–1965), Bewitched, (1964–1972) and I Dream of Jeannie (1965–1970). The comic book has been autographed on the front cover by Bill Bixby and Ray Walston.................BOTH COMIC BOOK AND AUTOGRAPHS ARE IN VERY GOOD CONDITION. 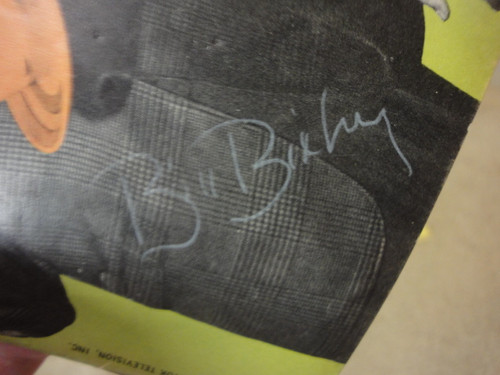