THIS IS AN AUTHENTICALLY AUTOGRAPHED PHOTO BY EDDIE MURPHY.. THIS IS A 8 INCH BY 10 INCH BLACK AND WHITE PHOTO SIGNED EDDIE MURPHY .'HOSTS MTV VIDEO MUSIC AWARDS'. HAS AN ATTACHED ORIGINAL BYLINE ON OFFICIAL CHANNEL 5 TV NEW YORK STATIONARY EXPLAINING THE PHOTO. CONDITION OF THE PHOTO AND AUTOGRAPH IS VERY GOOD. Edward Regan "Eddie" Murphy (born April 3, 1961) is an Academy Award-nominated, Golden Globe-, Screen Actors Guild Award-winning American actor, film director, producer, comedian and singer. Murphy ranks as the highest grossing film star in history, having a total of 33 films to date, his films grossing over $3.4 billion in the US alone, averaging $104 million per film.[1] He was a regular cast member on Saturday Night Live from 1980 to 1984, and has worked as a stand-up comedian. He has also enjoyed a minor singing career. Murphy has received Golden Globe Award nominations for best actor in a comedy or musical for his performances in Beverly Hills Cop, Trading Places, and The Nutty Professor. In 2007, he won the Golden Globe for Best Supporting Actor for his portrayal of soul singer James "Thunder" Early in Dreamgirls,[2] and received a nomination for the Academy Award for Best Supporting Actor for the same role. Murphy's work as a voice actor includes Thurgood Stubbs in The PJs, Donkey in the Shrek series and the dragon Mushu in Disney's Mulan. In some of his films, he plays multiple roles in addition to his main character, which he calls a tribute to one of his idols Peter Sellers (who is famous for playing multiple roles in one film), films which Murphy has played multiple roles include Coming to America, Wes Craven's Vampire In Brooklyn, the Nutty Professor films, where he played much of the Klumps clan, Bowfinger and 2007's Norbit. Another trademark of Murphy is his deep, infectious, and considerably goofy laugh. His other trademark is a recurring line he says in movies "How you doin'?", which he states is his catchphrase in real life. 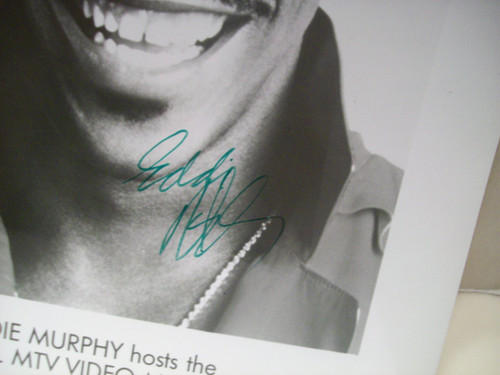