THIS IS AN AUTHENTICALLY AUTOGRAPHED LP BY DAWS BUTLER AND DON MESSICK... ORIGINAL TV SOUNDTRACK-MR JINKS, PIXIE AND DIXIE(COPLIX CP 208)COVER IS SIGNED BY DAWS BUTLER AND DON MESSICK. CONDITION OF THE VINYL,COVER AND AUTOGRAPHS IS VERY GOOD. Pixie and Dixie and Mr. Jinks is a Hanna-Barbera cartoon that featured as a regular segment of the television series The Huckleberry Hound Show from 1958 to 1962. It starred two mice, Pixie and Dixie, and a cat, Mr. Jinks (a.k.a. Jinksy). Pixie was voiced by Don Messick, and Dixie and Mr. Jinks were voiced by Daws Butler. Dixie, appropriately, talked with a southern twang. (It has been suggested that Jinks' laconic drawl was in some ways inspired by actor Marlon Brando, though the similarity is a distant one, at best.[citation needed]) In many ways the shorts resemble Hanna and Barbera's earlier better-known creation, Tom & Jerry, which also featured a warring cat and mouse (sometimes two) in a domestic setting. However without Tom and Jerry's more lavish budget for full animation, the Jinks team had to rely on funny dialogue and voices to carry the cartoon's humor. The cartoon was also less violent, and unlike the slightly sinister Tom, the headstrong Jinks was, in reality, too dense to pose much of a real threat to the mice. Pixie and Dixie and Mr. Jinks is also remembered for Mr. Jinks' rhyming but ungrammatical lament, "I hate those meeces to pieces!". As with Huckleberry Hound, Mr. Jinks would frequently talk directly to the audience, and discuss his plans to trap the "meeces". 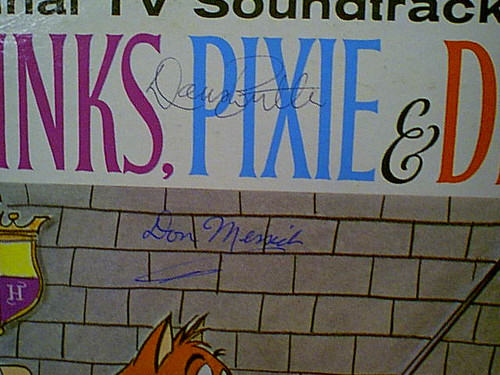