This item is a 7 1/2" X 9 1/2",black and white lithograph photo of actor Robert Montgomery. The lithograph photo was a supplement of The Philadelphia Record Newpaper-Sunday September 27, 1936.As a child, Robert Montgomery enjoyed a privileged life, as his father was the president of the New York Rubber Co. When he died, the fortune was gone and Robert worked at a number of jobs. He later went to New York to be a writer, and on the advice of a friend tried acting. He worked with George Cukor on the stage and his first film, at MGM, was So This Is College (1929). When Norma Shearer picked him to be her leading man in Private Lives (1931), he was set. He played many likable characters over the years, covering the gamut from very poor to very rich. In 1935 he became President of the Screen Actors Guild. His stay with MGM lasted 16 years, and was only interrupted by WWII when he joined the navy. He saw action in both Europe and the Pacific. He returned to MGM in 1945 and co-starred with John Wayne in the John Ford-directed They Were Expendable (1945) and then made his directorial debut with Lady in the Lake (1947) (although he had directed a few scenes, uncredited, in "They Were Expendable" when Ford took ill). He then left MGM to become an independent director, preferring work behind the camera instead of in front. He was a friendly witness before the House Un-American Activities in 1947 during the McCarthy era and then spent most of his time on television and stage. His popular show, "Robert Montgomery Presents" (1950), was where daughter Elizabeth Montgomery got her first acting job.The lithograph photo has been autographed on the front by Robert Montgomery with a fountain pen in black............BOTH PHOTO AND AUTOGRAPH ARE IN VERY GOOD CONDITION.............. 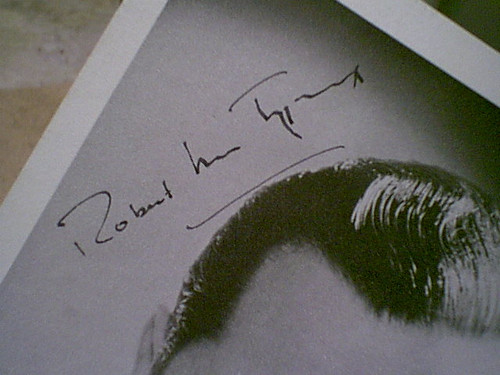